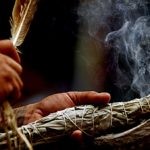 If you grew up religious, you probably witnessed the ritualistic use of smoke in ceremony. For me it was frankincense and myrhh being burned during Sunday mass. For others it might be smoldering incense at their Buddhist Temple, or the spiraling tendrils of bukhoor in a mosque. There is something primordial within us that connects smoke with spirituality. In Native American tradition, it’s seen as a bridge to the higher realms, a way to bring in good spirits and dispel the negative or ... [Read more...] As Valentine’s day approaches many of us are thinking about that special person in our lives and how we can show our love to them. Today, I want to share a simple practice that opens the heart center so that we can be truly present with ourselves and our partners. It’s easy to buy a hallmark card and chocolates, but are you willing to let your love light truly shine? The Technique The process below is known as EFT or Emotional Freedom Technique, and it’s an immediately effective ... [Read more...]

An Ancient Verse That Shatters The Illusion I came across a poem this week that stopped me in my tracks. I was reading the Tibetan Book Of The Dead when the eight lines below jumped off the page. I’ve never seen a description of “source” written on paper so succinctly. This is the epitome of what we are touching at the height of ceremony and deep meditation – when we are truly awake. These words are now printed on the wall next to my desk: Remember the clear light, The pure clear white light From which everything in the universe ... [Read more...]