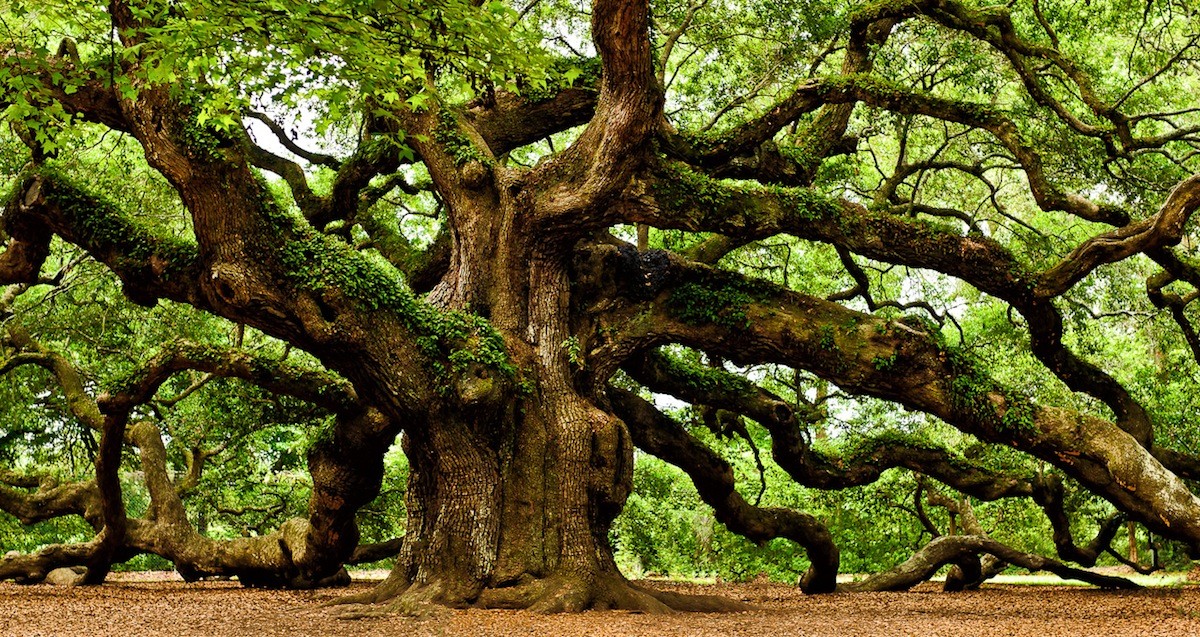 A few years ago, I took a trip up to the coastal wilderness of Northern California to meet with  Native American elder, Dennis Martinez.

Born of O’odham and Chicano heritage, Dennis has spent his life educating both native and non-native people in the practices of indigenous reforestation and the wild medicines that grow in the Klamath Mountains. His deep wisdom and gentleness made learning from him easy! I was intrigued from the moment he opened his mouth.

We spent the entire day walking through the woods, discussing the medicinal plants that were used for generations by the tribes of the Pacific Northwest.

And though there were plenty of takeaways that completely changed my life, today I want to highlight two sacred trees that Dennis showed us — because tree medicine is often overlooked!

Let’s start with “The Tree of Life”.

The oak tree, specifically the red oak and white oak, were so important to the first people of California and Oregon that they called it “The Tree Of Life”. Those in the know still rely heavily on these majestic trees for their abundance of health benefits, and for food.

Walking up to a large oak, he turned to me and explained, “Each plant has its own pace, its own way of living from year to year and producing nuts, seeds, and fruit – many of which are good food and medicine.”

When we entered Dennis’ house, one of the first things I noticed was a big basket of acorns by the door. He explained that all acorns are edible and delicious when prepared the right way. They were planning on grinding these up into a nutrient dense acorn flour and making bread from it. Growing up, we were told in school that this bountiful, everyday nut was inedible, even poisonous – yet another chapter that the modern world appears to have gotten wrong.

The bark of the oak tree has been used for thousands of years for its medicinal qualities. For indigestion and bowel problems, the fresh bark is charred and made into a “charcoal soup” that alleviates the symptoms. A decoction of the bark is used to treat throat infections, kidney infections, and kidney stones.

Because of their styptic properties, the leaves and bark of the oak are made into infusions and used to treat burns and cuts.

During our medicine walk, Dennis pointed out a few different pine trees and gave us the download on the myriad uses that this forest dweller has to offer.

Scraping off a bit of the sticky ooze from the bark, he explained that this delicious smelling pine pitch has powerful antibacterial and antimicrobial properties. Dennis often uses this as quick wilderness first aid for cuts, slivers, and burns.

The inner bark can be eaten as a survival food in times of severe hardship or if you are lost in the woods for an extended period of time. It can also be used as an expectorant to lubricate the respiratory tract and ease a bad cough.

But the most cherished part of the pine, at least by Dennis, is the needle. He explained that the young pine needles are a great source of vitamin C, A, E, and a host of B vitamins. They also have strong antimutagenic, antioxidant and antiproliferative properties, which help in preventing the growth of cancer cells.

Dennis told us a few stories of western explorers who were bedridden on ships, dying of scurvy, who were saved by indigenous healers with spruce needles. He also said that during the Spanish influenza the folks who ate pine needles didn’t become ill, and the ones who didn’t did.

Dennis shared a ton of forest medicine wisdom that day, but as we were investigating a wild tobacco plant he said something off-hand that reassured me that he wasn’t giving away too much of his sacred ancestral wisdom.

Staring up into the trees, Dennis said, “There are certain plants obviously that can’t be shared with the masses, but these are not them. If they were, I wouldn’t be talking about them. They may be exploited and they’re that valuable. They’re both culturally valuable and commercially valuable – a combination that can lead to bad things.”

He told us that for a westerner to ever gain access to those types of secrets, they need to spend a lifetime building trust with the tribes again. A trust that was violated too many times to be given back lightly.

The oak and the pine. Two trees that most of us think we know, but perhaps we’ve only scratched the surface.