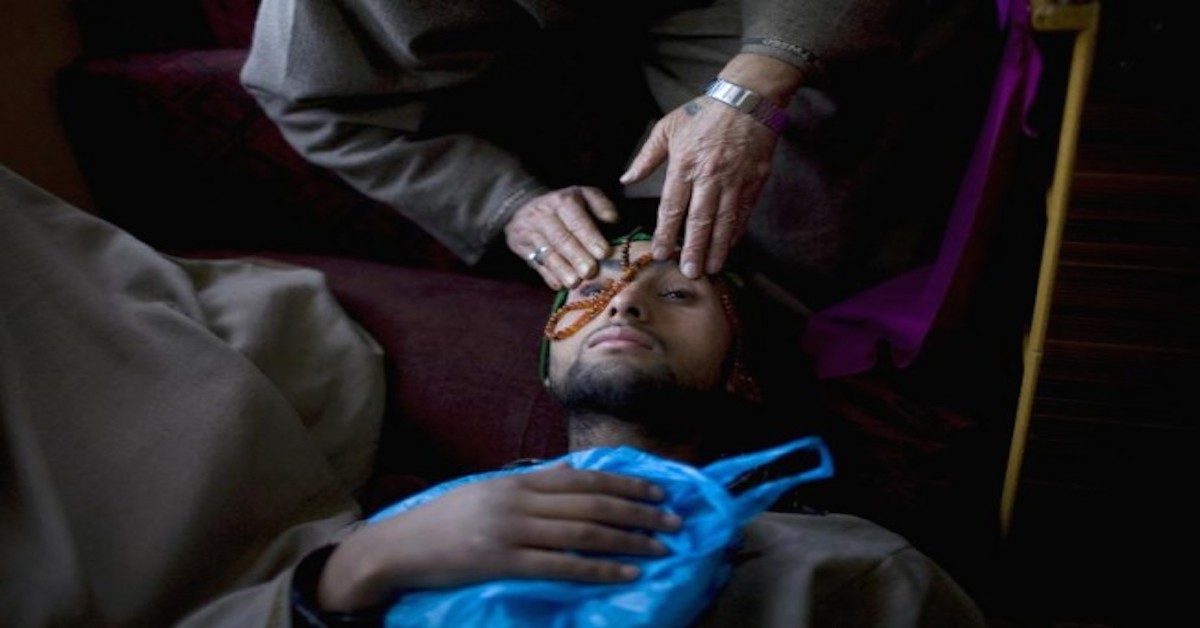 Mental illness can mean different things to different people. In the scientific community, we believe that it can be a totally chemical based condition, but that’s only one possible diagnosis. Is there sometimes more than meets the eye? In many civilizations around the world, it’s not so much about what is physically wrong inside, but rather who may be around with you.  The term ‘spirit possession’ is often used as a cultural explanation for what is happening, with symptoms similar to those of schizophrenia.

While conducting research in Southern India, I asked two physicians about this, and they explained the concept of bad possession, whereby people were controlled by malevolent spirits. I wanted to understand, where do discarnate beings exist? How are they created?

A Different Kind of Doctor

In Pondicherry I met a charismatic spiritual psychiatrist Dr. Basu, who intuitively felt some of his clients developed mental disorders as a result of being possessed. At times he took advice about the causes of ill health from traditional healers and clairvoyants. He was also open to the possibility that a patient’s previous life influenced their present, or they might be overshadowed by the roaming spirit of a dead person.

Dr. Basu introduced me to an elderly Muslim cleric who said he could distinguish between possession and psychiatric illness. He treated those cases with prayer and protective amulets, while others he referred to the psychiatrist’s clinic. The cleric explained about spirits: “beings of another world have different types of bodies, or subtle bodies, and they can move in subtle ethereal space. Sometimes they come and have a bad influence on human beings, and that causes illness.”

Dr. Pandey, a sensitive colleague of Dr. Basu, had another view on disembodied beings. He suggested they were created by being thrown out from their bodies at sudden death, during which time a bystander might catch them.

Dr. Pandey explained his understanding of the mechanism:

“Our body is like a receptacle, a container, or a vessel, which contains many forces. It is like a receiver and a transmitter, like the TV, which crosses many different levels of vibration. Depending on what we are tuned to, we receive one force, which may or may not be revealed to others. Disembodied beings occur when the body disintegrates. Then these beings become disembodied, and they float freely in the environment, from where some people can catch them. Not everyone can catch them”…“Insanity can be due to possession by these disembodied beings, these hostile beings.”

Once an entity becomes attached to a human being, the human may have trouble reincarnating, and get stuck on the earth’s plane after they die.

In a case from Dr. Basu’s clinic, a usually cheerful woman tried to hang herself several times. As a child she saw someone commit suicide by hanging, and this had affected her. He thought it was possible the discarnate entity from the hanging suicide had attached and imprinted itself on her.

He consulted a clairvoyant who looked at the woman energetically, confirmed she had an imprint, and removed it from her. Dr. Basu also recommended appropriate psychiatric pharmacology; a religious ritual to clear the air; prayers at a local shrine; and pragmatically, asked her to dispose of any artifacts with a negative history. This was his integrated approach to healing.

Later the psychiatrist presented me with a new insight on murder and spirit possession saying: “if a man committed murder, there was no point in punishing him or carrying out the death penalty, without addressing the spirit that possessed him and forced him to carry out the murder. If the possessing spirit was not healed, it would jump onto someone else, and force them to commit future dark deeds.”

A Different Kind of Treatment

He explained compassion and prayer were the way forward: we needed to lift an occupying spirit to allow real healing transformation to occur, and stop the pattern of murder.

He also mentioned ‘benevolent possession,’ whereby helpful spirits overshadow a person to give them enhanced clairvoyance and healing insights. “Some people get possessed by good spirits, and many people who suffer illnesses go to these possessed people. They have specific times when they are possessed, say once a week or twice a week. During their possessed state they say which medicine is required’.”

I was told of a man who had special skills of deliberately possessing spirits, which he invited to work as healers. “He had control of some beings under him. In Bengali it is called ‘pishar siddha,’ that is this gentleman could possess spirits: those entities were under his control. He used those entities for curing people; he used to give medicine.”

However, intense spiritual practice without grounded human embodiment can lead to a spiritual emergency. Dr. Basu expressed a cautionary note about the dangers of intense practices as a possible trigger for mental ill health.

During my visit to India, I crossed paths with physicians and healers with a specific interest in spiritual concerns. Through serendipity, I was able to interview sensitive practitioners, and ask the question “how is this material transferable to health care practices in the west?”

Dr. Pandey suggested there was a problem when medical practitioners had reduced awareness of the existence of non-physical beings. He considered this could result in prolonging someone’s mental distress: “Our ignorance also hinders true intervention. We really don’t know what is happening. We stem peoples’ consciousness with drugs, but the being or the fragment of the being remains, or their consciousness remains at the same level, so there is a tendency for illnesses to reoccur, or to be prolonged.”

As scientists, surely we need to understand peoples’ beliefs when addressing our concerns about illness. The concept of an individual being possessed by a disembodied being creates an interesting phenomenon, not just in India, but in other cultures too.  Since the responsibility isn’t placed on the individual as much, less stigma is attached and recovery is assumed possible.

But what do these beliefs mean for modern health care? As the evidence builds supporting the long-term benefits of these spiritual interventions, two questions remain.  Should modern western doctors ever consider these techniques for those they view as mentally ill?  And if so, will they actually ever use them?

Natalie Tobert is a medical anthropologist. Through her ethnographic fieldwork in India, Sudan and UK, and her new book “Spiritual Psychiatries,” she brings fresh perspectives to the dialogue about mental health and extreme experiences, and explores whether Indian principles of consciousness are transferable to western populations. She facilitates seminars in hospitals, medical schools, and universities, supporting staff to reframe their understanding of spiritual beliefs and health. Her website is www.aethos.org.uk